SSDT: How to Solve the Circular References Issue

Today I’ll show you how to solve one of the most common issues you can face while working with SQL Server Data Tools Database Projects: the circular references.

Suppose you have a Visual Studio solution with two database projects, like this one:

the solution builds correctly. This build generates the SSDT_Main and the SSDT_CircularReference DACPACs as output in the bin folder of each project (keep in mind the SSDT_Main DACPAC here generated, because it’ll be used later).

Now, let’s add a view to the SSDT_CircularReference database that references the MainTable of the SSDT_Main database:

In order to buid correctly, we are going to add a reference to the SSDT_Main database into the SSDT_CircularReference project in this way:

But after clicking the OK button, we get the following error:

The Wrong Way to Solve It

So how to fix it!? Somewhere in some blog post you can find the hint to reference a pre-builded DACPAC of the SSDT_Main database (the DACPAC previously generated), making sure to select the “Suppress errors caused by unresolved references in the referenced project” option in the Add database reference‘s dialog box:

Checking that option you’ll avoid the error that the SSDT_CircularReference project will rise when looking for the references defined into the SSDT_Main DACPAC.

Now the solution builds correctly, but there is an hidden downside. If you try to publish (or debug) the solution in an empty target environment (where no existing database objects already exist), the engine can’t do the work because it faces the circular references issue during the deployment. In fact, if I debug my solution (hitting F5), the engine chooses to deploy the SSDT_CircularReference database first. So it creates the database and the table CircularReferenceTable  correctly, but it fails when it creates the vw_reference_main  view, because it can’t find the SSDT_Main database in the instance:

If the engine had chosen to deploy the SSDT_Main project first, it would encounter the same Invalid object name issue related to the CircularReferenceTable table.

The Right Way to Solve It

Having a SSDT solution that builds but can’t be published without manual operations is useless! So I thought to solve the issue trying to “detach” the part of the SSDT_CircularReference project’s script that causes the circularity. I found the solution thanks to the Composite Projects.

The main concepts behind the refactoring we’re going to do are these ones:

Now if we try to debug the solution, all works fine, but something strange occurs. Looking at the target instance, the view that references the SSDT_Main is missing:

Checking the output after the deployment operation, it seems the SSDT_CircularRefDetached wasn’t built and deployed:

the resulting deployment operation is this one:

But, wait… Now there are too many objects!

It’s clear that the engine has to deploy the SSDT_CircularReference first in order to resolve the SSDT_Main dependency. In fact you can check the projects’ build order right-clicking on the solution and clicking on Project Build Order:

Now hitting F5 we get the correct deployment:

Obviously if you want to publish your database in a target environment using VS and publishing files, or using the DACPACs, you’ll have to follow the aforementioned build order.

You can download the working Visual Studio 2013 solution here: SSDT_Circular_References.

Remember to update the server name in the Target Connection String of the Properties Debug tab for each project, based on your configuration:

I received more than one question about the way to solve a generic case in which n database projects have circular references between them:

The way to solve this case consists to isolate all the shared objects (and the ones referenced by these; eg. a shared view and all the tables/functions used in its definition) in a composite project for each database project. In this way each database will be defined by a couple of database projects: one containing the objects used only inside it (base) and one containing all the objects to be shared with the other databases (shared). Then you have to link the two database project (base + shared) through a “same database” reference (dashed lines in the picture):

In the picture above only the new references (shared <–> shared-shared) are shown for the sake of clarity, but all the other links still exist.

It’s possible to continue to add layers if needed, but in the most cases one layer is enough. For example, if DB 2 Shared is referred by DB 1 Shared and DB i Shared, it’s possible to add the new references directly in the first case, without generating circularity:

Thank you for reading!

Stay tuned for more news on our blog and subscribe to our newsletter if you want to receive our new posts in your mail, get course discounts… 🙂 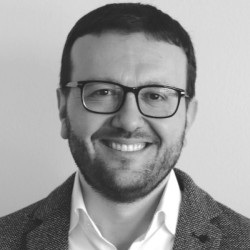